Only now that I have 3 children do I appreciate how awful it is when families are separated. My own family (mom, dad & 3 brothers) buggered off to Australia when I was but a fledgling – 22 years old and left all alone. Abandoned, really. Tossed out like an old…. well, you get the point.  My beloved family went in search of a better life, a chance to realize their full potential, and a cinema room. Also, like most South Africans, they couldn’t resist the allure of free stuff. Free schooling, free medical, free crap on the side of the road. (In Australia people leave ‘stuff’ on their verges, on a help-yourself basis, when they are done with it.) I actually have friends who have decorated their entire house using this method – even securing a working MICROWAVE. Personally I think Australia stole this concept from South Africa… I mean, who hasn’t had someone going through their trash on rubbish day? 😉 But wait… I digress….

Their leaving hit me hard. This led me to procreate at an alarming rate in the hope that they would return, unable to endure having (SO MANY) grandchildren so far away. Needless to say, this shrewd plan backfired. They stayed put, and I now have exorbitant medical bills & school fees to pay. (because here in SA.. its not free – the irony is not lost on me)

My family are quite good about their ex-pat status and they don’t criticise or condemn people that remain here in SA, but I have seen many a family torn apart by this “Great Divide” debate. That is what this blog post is all about:

Following the election of Nelson Mandela in 1994 thousands of South Africans, particularly professionals, immigrated from South Africa to Australia.  It’s no wonder “Australia’s Got Talent.”  Like rats deserting a sinking ship, these “cowards” hurtled over the Indian Ocean to the Land of Opportunity.  More than a fair few came back, but we will get to that. It is important to note that only a tiny percentage of these immigrants were Afrikaans, the majority being of English descent.  This is because Afrikaaners have more staying power than Viagra.  It is probably also because Australia won’t have them.  The mass exodus had many people commenting that “Would the last one out please switch off the lights?”  But let’s get real, people, Eskom will no doubt do that for us.

Twenty years later, there are still those that are scrambling over themselves in their desire to make it to the land down under. Personally I am staying exactly where I am. At least for now, South Africa may be a lot of things but at least we survive the Mayan Armageddon (which, admittedly, is proving increasingly difficult to pin down to an exact date) – the movie says so.

There is also an amazing value for life in this country.  People claim otherwise – that we have very little value for human life and that is why our murder rate is so high –but I disagree.  Every day in South Africa is a blessing.  Survival is a life skill.

Last December we had family visiting from the UK.  Excited to show them the wonders of South Africa we took them to a carol service at a nearby Park. I know, I know, anyone South African who tries to impress a Briton at a park needs their head read, but we had to at least try. Our park consisted of a relatively flat piece of completely overgrown ground, a swing set with only one working swing, and an overturned slide.  Kumba-freakin-ya!! The highlight of the evening was the raffle, for which each attendee was automatically entered on their arrival. *smirk* Where else in the world do you get something for nothing? (OTHER than Australia) Our smug arrogance was slightly tempered when the main prize turned out to be six months free security with Blue armed response services.

The great divide between these two continents has led to a war waging that people become very heated about. Some South Africans living in Australia claim we are idiots for staying. Others applaud us. Who is to know who is right, this topic is the stuff family feuds are made of. In my African dream, nobody would move away and family would stay together, but alas, this is not to be. Instead we spend our time justifying our actions to leave, or our decisions to stay.

And what of those who have no choice? Financially, commercially and emotionally, certain families might long to seek their fortune elsewhere but are unable to do so. Can we not rub their noses in it?  I have met an Australian who lives in South Africa who would not go back for all the tea in China. Yes, only that one, unfortunately. God Bless you Pete.

The bottom line is that it doesn’t matter where you choose to set down your roots. What matters is cherishing the moments that we have – the ones that take our breaths away (and yes, the natural beauty of this SA is something to behold). After all, home is where the heart is.

*Note* I did once enquire about applications to enter Australia, confident I had it in the bag. I got this reply: 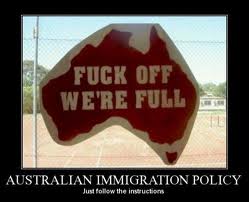 2 thoughts on “The Great Divide”