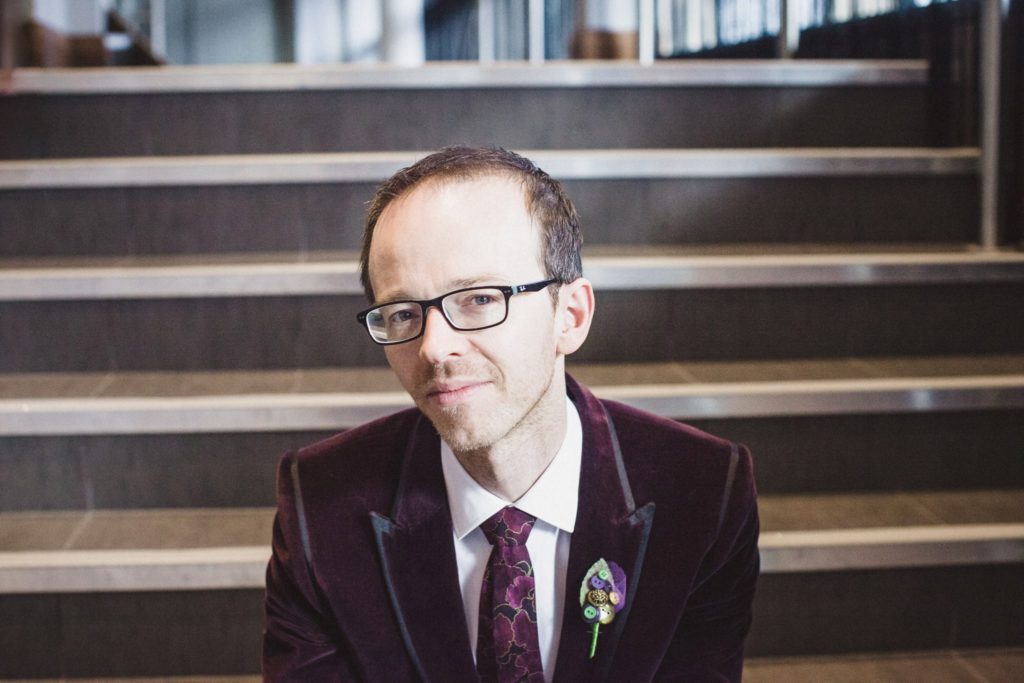 Mark Edwards writes psychological thrillers in which scary things happen to ordinary people and is inspired by writers such as Stephen King, Ira Levin, Ruth Rendell and Linwood Barclay.

In a world filled with indie authors scrambling over one another in an effort to secure a literary agent, British author, Mark Edwards was fortunate enough to land one fairly early on in his writing career. When no lucrative publishing offers were forthcoming, however, Mark and his agent parted ways. As it turns out, this was the best thing that had ever happened to him. When his self-published novel, Catch Your Death, hit the number 1 spot on the UK bestseller lists, Mark landed the agent of his dreams, and the two have worked together ever since.

A best-selling author in his own right, Mark has also enjoyed much success in his writing partnership with Louise Voss. Their novels are: Killing Cupid (2011); Catch Your Death (2011); All Fall Down (2012); Forward Slash and a series featuring Detective Inspector Patrick Lennon, starting with From the Cradle (2014) and The Blissfully Dead (2015). This dynamic writing duo has released a number of best-selling thriller novels and both Mark and Louise have built up an impressive fan following.

Mark, thank you so much for taking the time to speak to me. Firstly, let’s talk about your books. Which of your books ultimately launched your writing career, and why do think that was?

Hi Melissa. There are two answers to this. Firstly, Killing Cupid started everything off because it was the first book that Louise and I published ourselves and the everything else that has happened can be traced back to that moment, even though KC was not as big a hit as many of the books that followed. It led to our publishing deal with HarperCollins and we thought it was going to be easy from that point. Unfortunately, the books published by Harper failed to sell as well as anyone hoped and it looked like my writing career was about to end prematurely. Which leads me to the second answer. In 2013 I self-published my first solo novel, The Magpies, wondering if I could have success again – and it took off in a way I could barely have imagined. After that, I signed with Amazon Publishing imprint Thomas & Mercer and haven’t looked back. The Magpies saved my career and I owe that book a great deal.

You are extremely prolific. In 2014 alone, you published two of your own novels – Because She Loves Me and What You Wish For – as well as releasing From the Cradle, which you co-wrote with Louise. How on earth do you manage to push out so many books and still maintain that high quality that your readers have come to expect?

It certainly looks like I have written, or co-written, a lot of books in a short space of time but there is some cheating involved! The Magpies and What You Wish For were both books that I had written back in the 1990s. I edited and updated them but that didn’t take too long. I think it’s important to work hard and get as many books out as you can, as long as quality doesn’t suffer. In fact, I am slowing down and taking longer to write each book, probably because I am pushing myself harder each time. It now takes around nine months to write each book. That’s still fast compared to some writers (Donna Tartt takes ten years). For me, most of that time is taken up working out the plot, ensuring the twists and turns work and that the story is compelling. I can get words onto the page pretty rapidly but spend a lot of time agonizing over what happens next.

Speaking of your success, the popularity of your novels has enabled you to write full-time. How does it feel being able to turn your passion into a career?

It’s wonderful, of course. Wonderful not to have a boss. I don’t have to go to endless meetings, or commute, or listen to people talk about ‘blue sky thinking’. Being able to tell people I’m a writer makes me feel proud. But my day-to-day life is far from glamorous. I get up, do the school run, go back to my desk and write until it’s time to pick the kids up again. It’s certainly not a hard life, and it’s great to earn a living and support my family doing the thing I love, but I think I imagined it would be a bit more exciting. I only really feel like a proper author when I go to literary festivals or have lunch with my agent or publisher. That’s always great fun.

A common problem in “working from home” is finding a balance and being able to separate your professional and your personal life. Tell us about your writing process.

It is challenging. I have three children under nine. My youngest was at home all day until recently and it’s hard to write when he’s in the house. I have written chapters in the past with a toddler literally crawling on me and thrusting a copy of The Gruffalo under my nose… So I used to go out to coffee shops to work. Now that my youngest is at nursery in the mornings I get a few hours of peace each day. The upside of all this though is that I am always around and get to spend a lot of time with my kids. I think that’s good for them – and especially for me!

What do you think social media has done for author marketing and brand exposure in particular?

The best thing about social media is that it has made it very easy for readers and writers and communicate, and that is genuinely my favourite thing about being a writer. I love hearing from readers, whether it’s a quick tweet or a long email. In the past, I think that writers were far less accessible. Perhaps you might meet your favourite author at an event, or you could write them a letter (or an email). But now you can tweet me to let me know you’ve just finished my book and I will often reply immediately. It’s really important for authors to nurture their relationship with their readers. I want them to feel they have a personal connection with me and I put a lot of effort into it because I am flattered and grateful that so many people give their precious time and money to my books.

You admit that you spend far too much time on Facebook and Twitter. How distracting are these platforms when you are working and how do you switch off and get back to the writing?

I’m not as bad as I used to be but it can be very distracting because both platforms are horribly addictive. It’s hard not to keep flicking to Facebook when I’m supposed to be writing, just to see if anyone has said anything interesting. This is the downside of not working in an office. Most of my human interaction – apart from with my wife and kids – comes via a computer screen.

How did you and Louise meet?

I was on a BBC documentary about aspiring writers and she emailed my then-agent because she was in the same situation and empathized with me. We became ‘pen pals’ for a couple of years before we actually met in the flesh. Fortunately, we got on really well.

You and Louise have taken an approach that has come under scrutiny over the past few years. The infamous co-writing. Some bigger authors have taken criticism for this approach, but it seems to be working well for you and Louise. Why do you think this is?

I’m not sure which authors have faced criticism for co-authoring. I guess people like James Patterson? That would be because he does very little of the actual writing. He essentially helps with the plot and editing and takes most of the money. With Louise and I – and most other writing partnerships – we do half the writing each.

How on earth does one co-write a book? Do you each write a particular scene/chapter/character? Do you sit down together and thrash it out? How does it work, for you exactly?

We don’t sit down together to write. We meet occasionally to discuss ideas but most of it is done via email or Skype. We create a chapter plan and then divide up those chapters, saying ‘You write this one and I’ll write that one’. As soon as that chapter is finished, we send it to the other for comments and editing. Once we are both happy with that chapter it goes into a master document and we move on. We tend to take different characters as all our books have multiple points of view. That makes it much easier.

Let’s talk about agents and publishing. You had a bad experience and opted to self-publish. What ultimately prompted this decision and would you ever change your mind and go back to the traditional publishing establishment?

I started self-publishing because I was rejected by traditional publishers. But when I did get a publishing deal it didn’t work out so I went back to self-publishing but only for one book. I’ve been with Thomas & Mercer since 2013 and they are fantastic. They work just like a traditional publisher except most of the sales are in ebook and on Amazon rather than in shops. I would still love to see my books in stores but am doing so well with Amazon at the moment that I have no plans to change course. Having said that, things can change quickly and I wouldn’t rule anything out. I like traditional publishers. They produce a lot of fantastic books. I just want to carry on making a living from it however I can.

In researching this article I stumbled across another Mark Edwards, who is also an author, and I noticed that many of your readers have not realized that this man is not actually you, resulting in a few harsh reviews. How do you deal with these, particularly as they are so undeserved?

Yes, he is a thorn in my side. The story is that another guy with the same name as me has written a number of books and self-published them. I believe that he has changed his covers to take advantage of my success, making his books look like mine. It leads to lots of readers buying his books thinking they are by me then being disappointed. I get emails saying things like ‘If I’d read this first I would never have tried one of your other books’ which drives me crazy. I wish my parents had given me an unusual name!

What can we expect from Mark Edwards and/or Louise Voss in 2016?

My next psychological thriller, The Devil’s Work, will be published in September 2016. It’s about colleagues from hell. This is my first solo book with a female protagonist and I think a lot of people will be able to relate to it. As with my other books, I have taken a familiar situation (in this case, working in an office) and made it terrifying.

Mark Edwards currently resides in the West Midlands, England, with his wife, their three children and a ginger cat, Billie, who was named after an actress from Doctor Who.

When he’s not writing or looking after children, Mark reads a lot, devours TV box sets and spends far too much time on Twitter and Facebook, where he loves chatting with readers. He also wishes he had more time to do the activity he loves most: karaoke.

To find out more about Mark and to download a free collection of short stories, please visit his website: www.markedwardsauthor.com