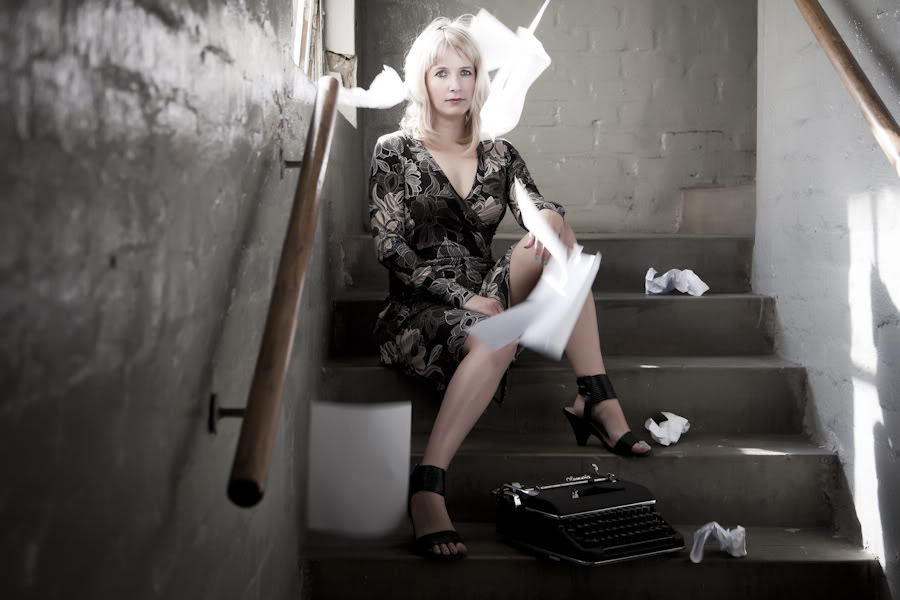 Her work has been praised by Stephen King. George RR Martin dubs her a “major, major talent.” Leonardo Di Caprio’s production company sends her Christmas cards. South Africa’s hottest speculative-fiction writing export, Lauren Beukes, who is regularly seen sporting a Wonder Woman t-shirt, is a superhero in her own right.

Lauren is an award-winning, internationally best-selling novelist who also writes comics, screenplays, TV shows and journalism. Her books have been translated into 26 languages and have been optioned for film and TV. Her accolades include winning the Arthur C Clarke Award, the prestigious University of Johannesburg prize, the August Derleth Award for Best Horror, the Strand Critics Choice Award for Best Mystery Novel, the RT Thriller of the Year, the Kitschies Red Tentacle for best novel, the Exclusive Books’ Bookseller’s Choice Award and her work has also been included in best of the year round-ups by NPR, Amazon and the LA Times.

Lauren was also the showrunner on South Africa’s first full length animated TV series, URBO: The Adventures of Pax Afrika which ran for 104 half hour episodes from 2006-2009 on SABC3. She’s also written for the Disney shows Mouk and Florrie’s Dragons and on the satirical political puppet show, ZANews and the Archbishop Desmond Tutu’s South African Story.

I had a look at your schedule for 2016 and I’m surprised you find even 5 minutes to spare! I know you’re preparing for the FanCon Cape Town Comic Con and the Franschoek Literary Festival this month, but you just returned from the Persian Gulf, where you attended the Art Dubai event. Last year your USA and Euro tours included eight different countries. How do you cope with all of it and still find time to get any writing done?

I steal time whenever I can, but you have to remember that for all the travel I do (and it is exhausting and demanding and I spend half my life jetlagged), I am in the incredibly lucky position that this IS my day job. I’m not trying to write at night while balancing another full time career as I was before The Shining Girls.

You have a young daughter. Does she travel with you and, if not, how do you both cope with the intensity of your manic schedule?

She stays with her dad. She’s seven and finds book launches incredibly boring. But she does get frustrated. Last year she said to me: “But why do you have to travel? Why can’t you have a normal job, like normal people?” And then she thought about it for a second and said, “Oh yeah, cos then you wouldn’t get to write Wonder Woman comics.”

Does she share your love for reading and writing? Do you encourage her or is it in the genes?

She came out loving stories. As a nine month old baby, we’d take her to story time at the Book Lounge and she’d sit on my lap right at the front, riveted to the rhythm of the words even if she had no clue what they meant. There’s a power in storytelling, particularly when it’s communal. But story time is sacred time in our house – if we get home late, we might skip TV or playtime, but we’ll never skip stories. She’s starting to read more on her own, but it’s still a very special time for the both of us, especially reading comics like Nimona by Noelle Stevens or The My Little Pony comics. She tells me off if I get the voices wrong.

In many ways you are considered to be a pioneer, paving the way for other South African speculative fiction writers. How did you start writing? And did you ever expect to become such an international sensation?

I wanted to be an author from the time I was five years old and I discovered that was a job you could have, that you could get paid money to make up stories. I don’t know how to say this without sounding horribly immodest, but I knew, deep in my gut, I knew that I was going to do this and I shaped my whole life, from five, towards that ambition.

Your advice to would-be authors is to follow a career in journalism. How do you think your years as a journalist equipped you to write books?

Well, my advice to writers is to write. Journalism is a great way to train on the job, to be forced to meet a deadline and a word count, to write in different styles, to find different ways into a story and it exposes you to the world. Journalism gave me a way to explore other perspectives, like a backstage pass into other people’s heads.

Let’s talk about Broken Monsters. The plot deals with a serial killer trying to remake the world in his image and quite honestly scared me half to death. Even Stephen King, considered by most to be the greatest horror writer of all time, hailed it “Scary as hell and hypnotic.” The book has been racking up great reviews from The New York Times to The Guardian and NPR and won best suspense novel in the ALA’s 2015 Reading List. What inspired this particular story?

Um. Truthfully? A failed comics pitch. I had the image of a female detective finding a body that was half human, half deer and started thinking about what that meant, who created it. As someone on Twitter ingeniously observed, “So you basically killed Mr Tumnus from Narnia?” Yep. It’s about creativity and thwarted ambition, about art and masculinity, how the Internet shapes who we are and being a teenage girl in this strange new world we live in.

The Shining Girls is arguably your most well-known title. It certainly isn’t short of awards – including the prestigious Strand Critics Choice Award and the University of Johannesburg Prize. The book has been optioned by Leonardo diCaprio’s production company, Appian Way to be turned into a movie. Can you share any information about the film?

It’s in development, which means they are working on a script, hunting down the right director, shopping it around to talent. It might take anywhere from 4-10 years to get made and, sorry to disappoint you, but 99% of books that get optioned to be turned into movies never make it to the big screen at all. It’s that whole having to raise $30 million thing.

Which of your books are you most proud of and why?

Zoo City is my favourite, Broken Monsters is my best.

Moving on to comics and graphic novels. How is the writing different, apart from the actual word count?

It’s much more collaborative, working with an artist and a colorist and the letterer who all help unfold the story and make it their own. On Survivors Club, I’m co-writing it with Dale Halvorsen (better known as Joey Hi-Fi, award-winning cover designer who does all my South African covers). I love the surprise of working with other minds, when they come up with things you wouldn’t possibly have on your own.

Your graphic novel with artist Inaki Miranda, Fairest: The Hidden Kingdom is a dark Tokyo twist on the legend of Rapunzel set in Bill Willingham’s Fables universe, and a New York Times bestseller. I adore the Fables world. How did you get invited to write in this magical universe?

I met Bill at the bar of a convention and he came along to a reading I was doing because he saw how nervous I was and felt sorry for me. But then he insisted on introducing me to his editor at Vertigo, Shelly Bond (now the head of the imprint) and set up the meeting. I’ve never felt like such a fraud in my life, even though I’ve always, always wanted to write comics, and hey, it’s turned out okay.

You recently began collaborating with Joey Hi-Fi, the alter ego of award-winning illustrator and designer, Dale Halvorsen, who designed the amazing artwork for your book covers. How does a typical “meeting” between the two of you go?

Dale describes our writing sessions on our limited run horror comic, Survivors’ Club as “creepy playtime”. We sit and talk through the plot and the character’s motivations and often act it out. (Those improv classes really came in handy). Most recently, we sat with Dale’s action figures and worked out the choreography of a very big and very complicated fight scene. It doesn’t really feel like work, even when it’s brain breaking. It’s very important to both of us that the story has a pay off, that we have the answers to all the mysteries, that the characters are acting in their interests or are consistent with who they are, and, this is the really hard part, that we subvert the horror tropes and take the reader somewhere unexpected.

You are a fierce supporter of local talent. You advocate many South African (and African) fiction writers in your talks, and you urge readers to support local writers, particularly in the speculative fiction genres. You also run ‘The Spark’ on your website, www.laurenbeukes.com, whereby you invite SA authors to blog about their own books and the inspiration behind them. What prompted this initiative and what message do you ultimately hope to convey to readers out there?

That SA fiction is not just heavy politics or apartheid stories or farm murders (although it might include some of those things) – that the talent here is up there with the international bestsellers clogging our shelves front-of-store.

You are fairly pro traditional publishing. What are your feelings about independent or self-publishing?

I would not want to do it myself. I like having a boss who sets a deadline and pays me an advance before the book ever hits the shelves, so I have the financial freedom and space to write, who manages the editing and copy editing and production and layout and commissioning a cover artist based on careful market research and does the distribution and marketing and publicity because that means I have more time to write. If those are things you’re happy to do yourself, power to you. I suck at that stuff and I’d rather leave it to the professionals who pay me. 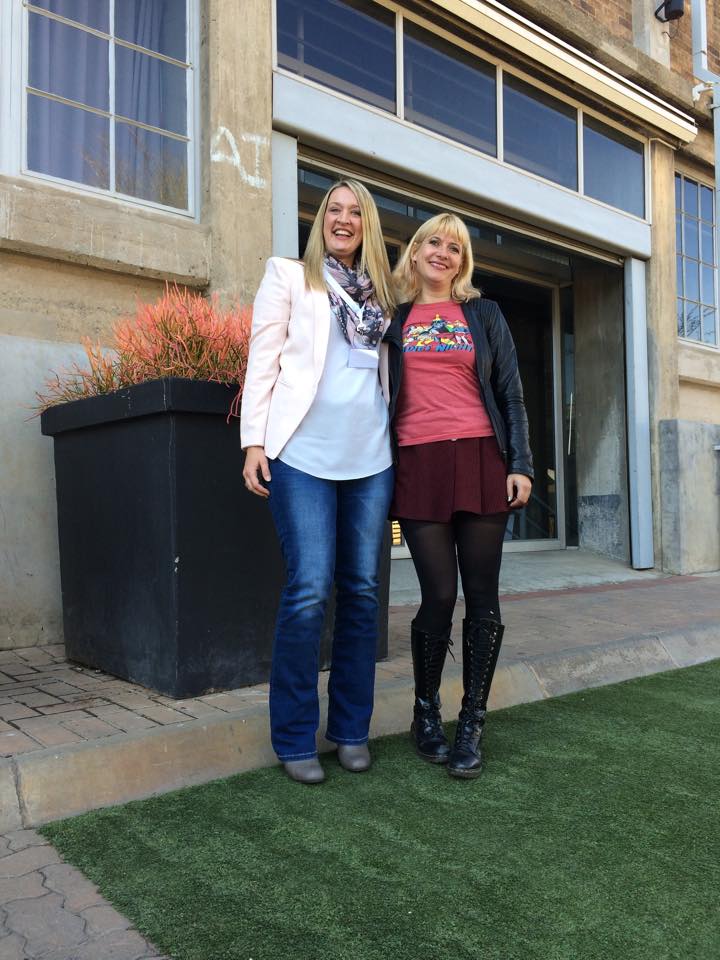 The one and only time we ever met you were wearing a pair of Doc Marten knee-high boots, fishnet stockings and a Wonder Woman t-shirt. What influences your style and what is your favourite personal item of clothing?

Interesting, surprising things, same as the influences on my writing. My favourite item is my 18 hole Docs that I bought in Camden in 1996 for 70 pounds, which was the most I’d ever spent on anything in my life up until that point. They’ve taken a beating and I recently had them re-soled, but they’re still good.

You don’t sound at all South African, which probably makes it easier for your international audience to connect with (and understand!) you. Your accent is hard to place, but my first thought was American. Have you always had the accent, or has it developed over time and through the course of your travels?

I am really, really, really, for real-life, South African. I was born here, grew up here, live here now. I did live in the USA for two years but Americans don’t think I sound American. My accent is more of a mid-Atlantic mongrel melange of English variations. Ashraf Jamal recently described me as an “international bastard”. That shoe fits and I’m wearing it.

What can we expect next from you?

We’re wrapping up the final issue of Survivors’ Club, which will be collected in a trade paperback (aka graphic novel) in September from Vertigo.

I have a book of short stories and essays, Slipping coming out in October from Tachyon Press.

And a new novel, Motherland, out 2017 from Penguin in the UK and Mulholland Books in the USA.